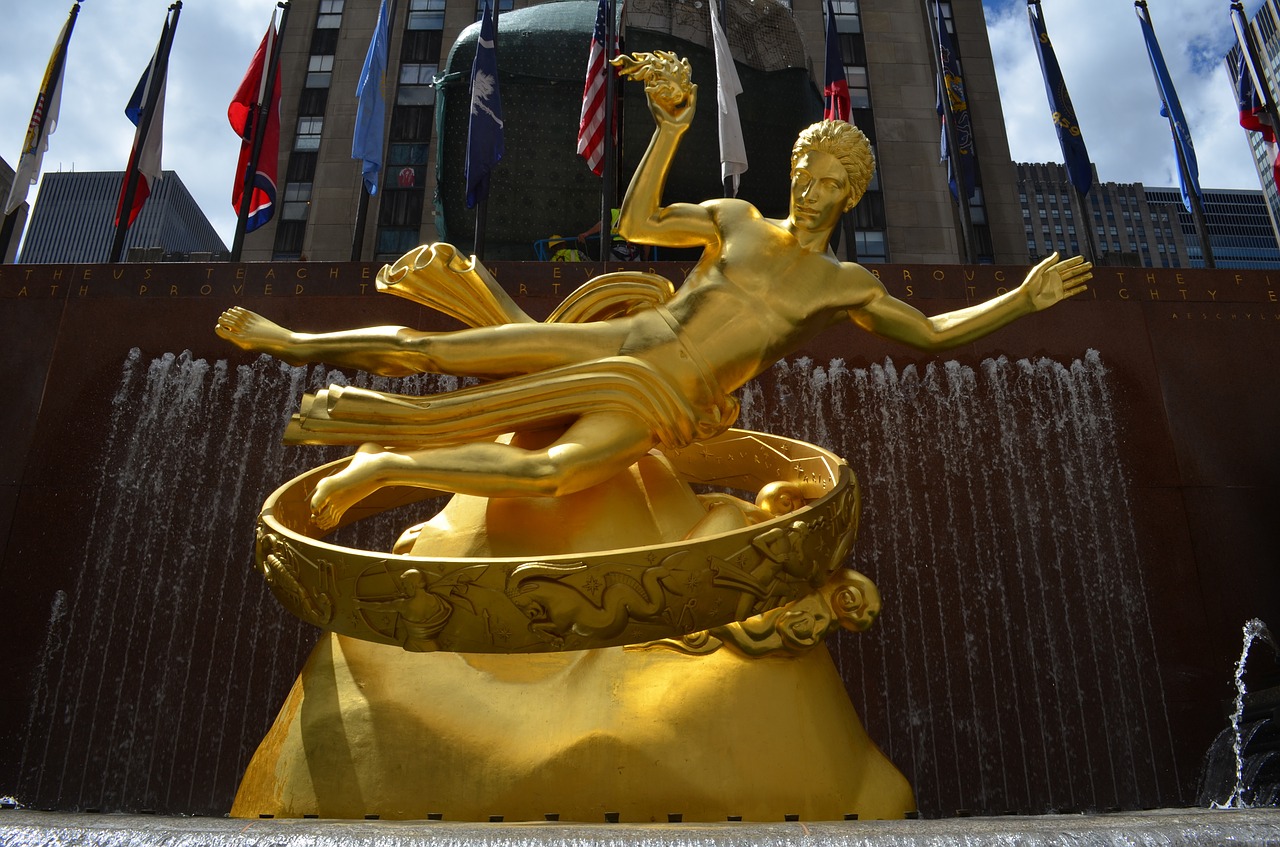 Hesiod writes Theogony in 700 BCE, “Prometheus (meaning “Forethought”) was one of the ringleaders of the battle between the Titans and the Olympian gods led by Zeus to gain control of the heavens.” (1)

The article goes on to say that Prometheus was credited for creating man out of clay, having a son that survived a great flood, and endowing mankind with gift so they could survive. It goes on to say he “stole fire, and by hiding it in a hollow fennel-stalk, he gave the valuable gift to man which would help him in life’s struggle.”

First of all, one has to consider if this is true or not. Is this merely a fancy story handed down from generation to generation? Is this like the telephone game where facts and details are lost or distorted along the way? Is it actually a factual story with a little poetic license? Possibly a bit of all of that.

In the Bible, according to Genesis chapters 11 and 14, there is the description of an epic battle for the control of earth and heaven. “And they said, Go to, let us build us a city and a tower, whose top may reach unto heaven; and let us make us a name, lest we be scattered abroad upon the face of the whole earth.” Genesis 11:4. The architect for this massive project is titled “Nimrod” which means “we shall rebel”.

Chapter 14 tells us of the warring nations. On your timeline this battle actually occurs a millennium before Hesiod’s writings.

14:1 “And it came to pass in the days of Amraphel king of Shinar (This king was usually associated with Hammurabi, who ruled Babylonia from 1792 BC until his death in 1750 BC. It is fashionable to identify Amraphel with Aralius, one of the names on the later Babylonian king-lists, and “the subjects and princes of Nimrod called his name Amraphel [means ‘I will cast down”], saying that at the tower his princes and men fell through his means.” – Book of Jasher 11), Arioch king of Ellasar, Chedorlaomer king of Elam, and Tidal king of nations; (Tidal a transliteration of Tudhaliya – either referring to the first king of the Hittite New Kingdom (Tudhaliya I) or the proto-Hittite king named Tudhaliya.)

14:2 That these made war with Bera king of Sodom, and with Birsha king of Gomorrah, Shinab king of Admah, and Shemeber king of Zeboiim, and the king of Bela, which is Zoar. (“The son of evil with iniquity (Bera king of Sodom) will come, but the Splendor of the Father (the Son; the Messiah), who is the King of the Earth (Shinab king of Admah), strong and fast (Shemeber king of Zeboiim), will destroy him (King of Bela), who is insignificant and small (which is Zoar).”)

14:3 All these were joined together in the vale of Siddim, which is the salt sea. (Siddim – a derivation of the word שׂד (shed), meaning demon, a word that has to do with the Babylonian word shedu, which denotes an evil spirit. The Valley Of Siddim would then mean the Valley Of Demons.)

14:4 Twelve years they served Chedorlaomer, and in the thirteenth year they rebelled. (Chedorlaomer is a transliteration of the Elamite compound Kudur-Lagamar, meaning servant of Lagamaru – a reference to Lagamaru, an Elamite deity, also known as the Mesopotamian goddesses, such as Isnikarap, Ishtar, and Nanna, whose existence was mentioned by Ashurbanipal and is the counterpart of the Akkadian god Ninurta. Ninurta was a Sumerian and the Akkadian god of hunting and war. According to Sumerian mythology, Ninurta slays each of the monsters later known as the “Slain Heroes” (the Warrior Dragon, the Palm Tree King, Lord Saman-ana, the Bison-beast, the Mermaid, the Seven-headed Snake, the Six-headed Wild Ram) This is the exact same legend that is formed by the Persians as Nergal, Greeks as Hercules and the Romans as Saturn. Nergal was sometimes called a demon and even identified with Satan. According to Collin de Plancy and Johann Weyer, Nergal was depicted as the chief of Hell’s “secret police”, and worked as “an honorary spy in the service of Beelzebub”.)

The point is, Biblically speaking, was there an epic war of the Titans? I would contend yes, but, like the telephone game the facts get distorted. Why? To discredit the Bible. Satan is the inventor and perfect liar. This is said of Prometheus “had a reputation as being something of a clever trickster.” So, to be clear, deceit is the common thread holding this story (of Prometheus) together. At the beckon of Satan.

The next point of contention would be something generally overlooked. “Prometheus tried to trick Zeus into eating bones and fat instead of the best meat during a meal at Mt. Olympus, Zeus, in anger, took away fire so that man would have to eat his meat raw. Prometheus then stole the fire as in the alternative version. This also explained why, in animal sacrifices, the Greeks always dedicated the bones and fat to the gods and ate the meat themselves.”

A quick look into scriptures, again we see, the Devil lying to us through man-made traditions and storytelling. Searching them with the terms “burn the fat” you will get at least 10 verses where YHWH commands this very thing. Leviticus 4:35 “And he shall take away all the fat thereof, as the fat of the lamb is taken away from the sacrifice of the peace offerings; and the priest shall burn them upon the altar, according to the offerings made by fire unto the Lord: and the priest shall make an atonement for his sin that he hath committed, and it shall be forgiven him.”

Eating the meat is also commanded,  Leviticus 10:12 “And Moses spake unto Aaron, and unto Eleazar and unto Ithamar, his sons that were left, Take the meat offering that remaineth of the offerings of the Lord made by fire, and eat it without leaven beside the altar: for it is most holy”

I find it interesting that Prometheus is said to have stolen the fire and hid it in a fennel staff. Dionysus, the Roman god, is said to have had this same staff. Fennel bulb is high in vitamin C, anti-oxidants and folate. Folate is also imperative for pregnant women, a deficiency of folate causes neural tube defects in the baby. It is very important to get plenty of folate for at least three months before conceiving as well as during pregnancy. Fennel tea is helpful for balancing menstrual cycles and boosting production of milk.

This power, through the fennel stalk,  is yet another promulgation of the fertility gods. Also interesting, this fennel staff is ‘magically’ transformed into the ferula staff. The papal ferula (from Latin ferula, “rod”) is the pastoral staff used in the Catholic Church by the pope. During the High Middle Ages, the popes once again began using a staff known as a ferula as insignia to signify temporal power and governance, which included “the power to mete out punishment and impose penances”. (2) 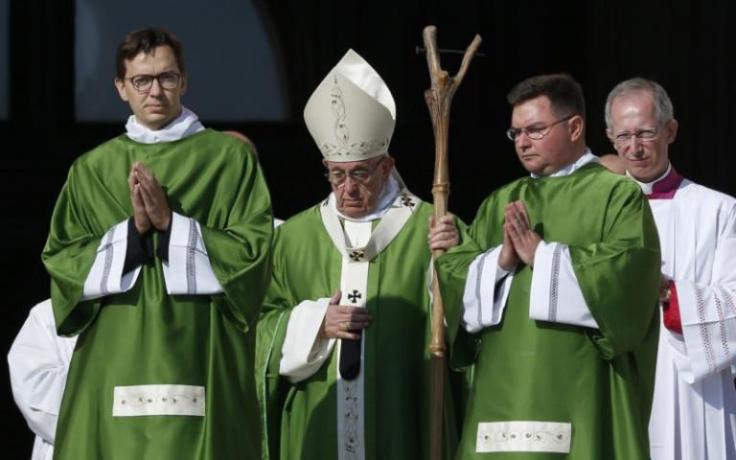 (2) “The Office of the Liturgical Celebrations of the Supreme Pontiff: The Staff”. Holy See Press Office. Retrieved 23 May 2013.