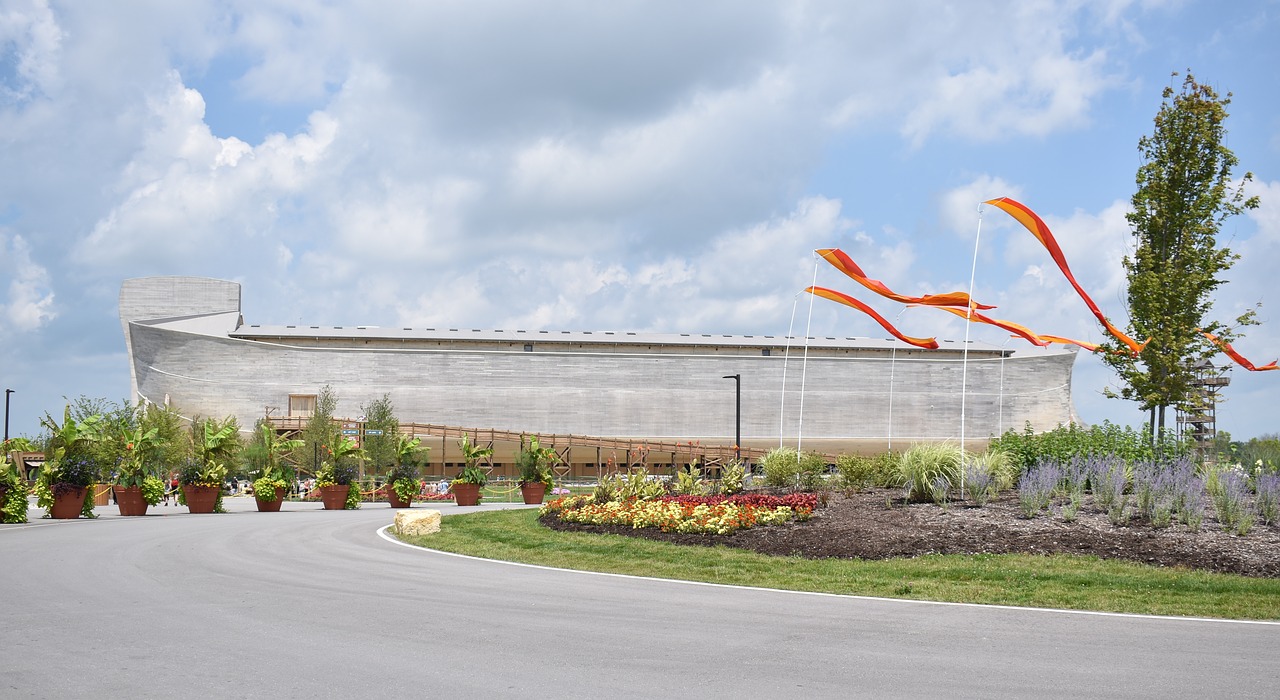 13 And God said unto Noah, The end of all flesh is come before me; for the earth is filled with violence through them; and, behold, I will destroy them with the earth.

14 Make thee an ark of gopher wood; rooms shalt thou make in the ark, and shalt pitch it within and without with pitch.

In Hebrew the Ark is called a “tevah”; it is the same term used for the basket that baby Moses would be placed in centuries later. A tevah is a box-like craft that is not the same thing as a boat or a ship. It is simply a device that floats, rudderless, and without a crew to operate it. The idea is that a tevah is guided only by God’s hand and providence and mankind is but a passenger.

As for the construction material there are no perfectly translatable tree names for “gopher wood”. Noting the physical similarity between the Hebrew letters g and k, suggest that the word may actually be kaphar, the Hebrew word meaning “pitch”; thus kaphar wood would be “pitched wood”.

I would suggest that the Acacia tree was used for several reasons. Egyptian mythology has associated the acacia tree with characteristics of the tree of life, not that the Egyptians are noteworthy, but the whole of the Sumerian-Akkadian post flood world considered the Acacia tree of great value.

Several parts [mainly bark, root, and resin] of Acacia species are used to make incense for rituals. Smoke from acacia bark is thought to keep demons and ghosts away and to put the gods in a good mood.

According to Easton’s Bible Dictionary, the acacia tree may well have been the “burning bush” [Exodus 3:2] which Moses encountered in the desert. Also, when God gave Moses the instructions for building the Tabernacle, he said to “make an ark” and “a table of acacia wood” [Exodus 25:10 & 23]. Also, in the Christian tradition, Christ’s crown of thorns is thought to have been woven from acacia thorns.

15 And this is the fashion which thou shalt make it of: The length of the ark shall be three hundred cubits, the breadth of it fifty cubits, and the height of it thirty cubits.

(450 feet long, 75 feet wide, and almost 5 stories in height. Marine engineers calculate that it would have had a displacement of about 43,000 tons or 86 million pounds!)

We see an interesting God-principle set down in the detailed instructions for the Ark: nothing is left for Noah to do but to accept God’s means of salvation for him and his family by following its prescription exactly. Here we also see that even Salvation is a co-operative effort between mankind and God. God’s role is to provide it; mankind’s role is to accept it by means of a moral choice of our will. But as much as Salvation is by grace, there are obligations that we have to God and some of it involves actions on our part.

Philippians 2:12 “Wherefore, my beloved, as ye have always obeyed, not as in my presence only, but now much more in my absence, work out your own salvation with fear and trembling.”

17 And, behold, I, even I, do bring a flood of waters upon the earth, to destroy all flesh, wherein is the breath of life, from under heaven; and everything that is in the earth shall die.

Noah and his family had to begin by believing what God told them: first, that mankind was wicked and God would soon destroy them. Second, that there IS a means to escape the destruction. Third, that means of escape is designed by the Lord and ONLY that means is available. Fourth, Noah would have to act in order for his deliverance to come about.

So it took great faith on Noah’s part to take God at His word when the current circumstances didn’t seem to indicate how such a thing could possibly take place. And it took effort; it was not simply a passive acknowledgment or intellectual acquiescence.

There was with Noah, as with us today, the simple formula of “salvation by faith through grace” and several millennium before Paul writes anything about it. Likewise, James 2:26 tells us, “For as the body without the spirit is dead, so faith without works is dead also.”

Noah could have believed all he wanted to, but, had he not picked up a hammer, he would have died along with the rest of them.

18 But with thee will I establish my covenant; and thou shalt come into the ark, thou, and thy sons, and thy wife, and thy sons’ wives with thee.

19 And of every living thing of all flesh, two of every sort shalt thou bring into the ark, to keep them alive with thee; they shall be male and female.

Notice the words “after their kind”, this is in reference to the animals that have not been corrupted in the flesh. Then the text states that God will bring them to Noah and that he does not need to go searching for the correct ones.

21 And take thou unto thee of all food that is eaten, and thou shalt gather it to thee; and it shall be for food for thee, and for them.

As with the Garden, food for mankind and animals was plants and plants alone. Now did that mean that some animals didn’t eat other animals and that man did NOT eat meat at this time? No; rather it meant that God defined food as plants and therefore when animals or humans ate animals [or other things] they were eating things that were NOT food. Not even fish was for food as of this time. Food, by God’s definition, is not merely anything that you can manage to get into your mouth and swallow, or anything that might taste reasonably good.

22 Thus did Noah; according to all that God commanded him, so did he.